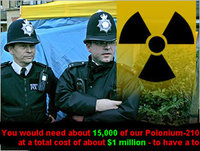 That's what is being reported; that he fell sick the day after former KGB Super Spy Alexander Litvinenko died last Thursday, only a few weeks after the latter started to investigate the death of a Russian Federation journalist who was herself both critical of and investigating the presidency of Vladimir Putin.

Meanwhile, the trail of Litvinenko's travels between the time he was contaminated and when he fell ill in early November is positively glowing. A full dozen sites where Litvinenko traveled show evidence of radioactivity.

Oh, yes, and there is the little matter of the fact that you can get your own Polonium-210 online. Yum yum. But don't plan to shop for an alternative to coal for someone's Christmas stocking: you'd need about $1 million to buy enough isotopes for a lethal dose.