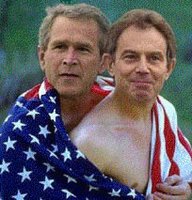 [Ed. note: George and Tony, in happier days, when the fresh blush of love (of money, power, of a desire to trash the Euro in favor of the American dollar which isn't doing so hot the last several years) yet seemed sweet and new.]

Well, Bush and the White House don't like "our bestest friend", the prime minister of Britain, Tony Blair, anymore either. Pointed out by Dedalus at Blah3:

A senior State Department analyst who specializes in British politics, and who also was probably involved in the discussions recorded in the Downing St. memo, made the mistake of stating the obvious in a talk yesterday:

Kendall Myers, a senior State Department analyst, disclosed that for all Britain’s attempts to influence US policy in recent years, “we typically ignore them and take no notice — it’s a sad business”.

He added that he felt “a little ashamed” at Mr Bush’s treatment of the Prime Minister, who had invested so much of his political capital in standing shoulder to shoulder with America after 9/11.

So all this famous "Bush family loyalty" only flows one way, to George and the Bushes; everyone else is just a potential shitting site.