And There Karlo Goes Again: Inserting Common Sense That Is Never Appreciated In a Capitalist Society! 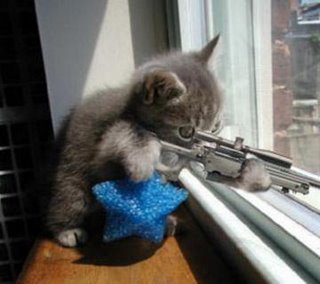 Karlo from Swerve Left is the same fellow who opposes Friday cat blogging on moral grounds yet is fine when kittens are used as snipers (to reduce the high cost of assassinations, I'm sure):

They're must be a large segment of our society with far too much money to spend. There is now a diet drug for dogs! Instead of drugging poor Fido, wouldn't it be easier to simpy put less dog-food in his bowl? People could then send the extra money to feed the hungry or cure blindness in some less frivilous corner of the planet.

And no! Of course there is no truth to the rumor that Karlo has not blogged in the last 12 days or so because he's appearing - in cognito, naturally - as a contestant on the L.A. version of "The Apprentice."

And if he was - not that he is! - I'm sure it would only be because he needs to ascertain that Osama bin Laden is not hiding in that hideous "The Donald" Trump comb-over (and comb-under, and comb-around).