Israel Won't Rule Out A Preemptive Attack on Iran 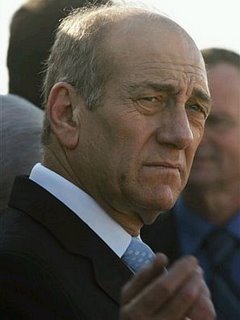 [Ed. note: Only Israel and the Bushies seem to think Iran's got anything that poses a true threat in the nuke department: oh, they don't really believe it but they want an excuse to go after Iran. Lying people into war: been too much of that going on.]

This is one of the few constants we can always depend upon from the leaders of Israel: taking a bad situation and trying to agitate it into a worse one.

Yet, while Israel's PM Ehud Olmert - reported by the Jerusalem Post - says there is still time for the United Nations to hit Iran with significant, harsh sanctions, let me point out that Israel regularly commits transgressions for which the U.N. always tries to impose significant sanctions.

What stops them from making Israel suffer consequences for its behavior?

The United States. We always step in and - even when every other U.N. voting member votes yes to stop Israel, the U.S. blocks the U.N. from doing a damned thing.

The good people of Israel, like the good people of the U.S., really need to be more discerning in their choice of leaders. The biggest threat to Israel's existence and to the goal of peace so many very decent Israelis seek is always Israel's leaders and those who tell them what to do.