[Ed. post: Hey, if I were President Bush's father and I had unloosed this all-ego/no-honor vicious thug on the world, I'd be sobbing, too.] 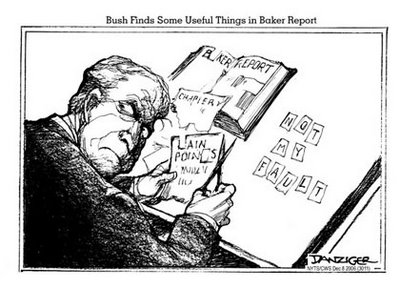 This is why I love Jeff Danziger, Vermont and New York cartoonist (thanks to Philip at Vermont Daily Briefing where I first saw the Danziger shown in 1st position here) . 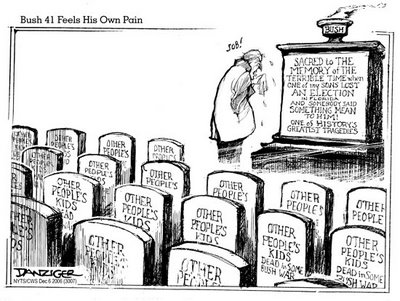 There is also this one from today, which makes a nice illustration to Welcome To Potterville's commentary on Poppy Bush's tendency to sob like a demented old woman everytime someone says something mean about one of his miserable, privileged sons:

Can’t say I can add much to this take by Mary MacElveen on Daddy Warbucks’ tears yesterday. Or rather, I can’t say that I can add anything G-rated to her well-written, polite and restrained reaction to it. There’s a time for calm, rational, pseudo-journalistic prose, to which I’ve been sticking for the most part since the day after election day.

And then there’s a time for the HST-possessed, murderously furious, Follow Your Rotten Corpse All the Way to the Fucking Gates of Hell prose that’s occasioned by spectacles such as the one to which we were treated yesterday with George H W Bush, one of our most miserable Presidential failures since Millard Filmore until the infamous power grab by his namesake Duh-bya.

Addressing the Florida state legislature yesterday, Bush broke down in tears like a new prison bitch getting his cherry popped by the Black Muslim brotherhood in the shower talking about his fat-headed son Jeb, the same Jeb who’s given the world new dimensions to the old phrase, “Do as I say, not as I do.”

Watching Bush’s mealy-mouth contort as he cried tears of joy for his son’s accomplishments only restoked the hatred and loathing that I began feeling for this family more than ever since Junior decided the presidency was his divine birthright. When Daddy was 86’d from the White House, I felt mere pity. Then with the ascendancy of Duh-bya and the rising fortunes of the Bush clan, when I began blogging almost two years ago it escalated from mere pity to condescension to withering contempt finally blossoming into a full-blown conflagration of rage and hatred.

And even when Daddy broke down in this Hallmark moment of semi-senile self-debasement, he still couldn’t resist taking a jab at the man who’d defeated his fat-headed son who would go on to help his brother steal a presidential election and would send state authorities to Terri Schiavo’s hospital to kidnap her. It made me think of Tom DeLay’s self-righteous speech when he stepped down from Congress, bad-mouthing liberals all 110 stories to the pavement below.

A lost gubernatorial election twelve years ago still makes him cry? How does he deal with his own defeat in 1992? Does he have a leather slave in the basement at Kennebunkport like Karl Rove in the imaginings of the Rude Pundit?