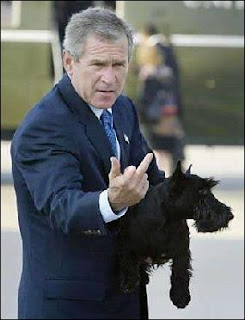 [Mind you, I don't think truth serum ever was - or is today - Bush's drug of choice ("Want a little noseful more cocaine coke with that whiskey, George?"]
Considering Bush has been known – mature, wise fellow that he is – to flip the finger at press and photographers, a part of me wonders if, on the occasion of his final State of the Union delivery tonight (Monday), he might just tell the truth, certain that no one can do a damned thing about all the misery, injustice, and death he has wrought. God knows the man looks for opportunities to smirk ever more insultingly.
So here's what I think he would say if truth serum were administered to him just before the speech:

Good evening, you pussies and ingrates:I could give you my usual bullshit about how I gotta hard job and I work hard (damned, I say that a heluva lot) but we all know if damned good 'o me to bother to put in eight hours a WEEK between my naps, ball game watching, riding my mountain bikes OVER old ladies, and planning for the vacations I take ev'ry few days.

But anyways... I won't make this long 'cos you don't wanna hear it and frankly, I like to pretend to get into bed real early like so I can hide my drinkin' and druggin' I'd make certain you'd do federal time for. So let's get this sucker over with.

Too effin' bad if you don't like the job I've done; it was never up to you anyway. And mixed in with all the lies was a little truth, anyway. Like when I said I wanted to make America an ownership society – not my fault if you thought YOU would be the owners when I really meant Saudi nationals, wealthy Kuwaitis, and scores of other rich for'ners would come in and buy everythin' up 'cos I made sure you can't afford to breathe.

As for Iraq, boo-frickin-hoo so many have died. At least they're not people I care about. My dumb-as-dirt daughters are just fine and livin' like princesses so I don't give a tinker's damn that your kid is too dumb to get into college 'cos I dumbed down the requirements for public education or 'cos I made sure they can't afford to go on to school. After all, we gotta military recruitment quota to fill and it's not like there are jobs out there for your grown kids to get; and where they can find jobs, I'll make damned well sure they are jobs that can feed a family.

Also, college ain't all its cracked up to be. Just look at me and I went to a bunch of the best effing schools in the country.

Besides, what I got planned for Iran makes Iraq look like a bleepin' Irish wedding by comparison, so I'll need your kids out on the front line with no body armor and few bullets, and not sittin' in some classroom learning liberal crap like Darwinism and math. Don't be thinkin' you can stop me from going to war in Iran either - look at all the shit you've let me get away with!

No matter what anybody tells ya, the economy's just FINE. Know how I know that? Cos all my fat cat friends and family are a heluva lot richer now than they were when I first came into office. And if you're a lot poorer because of it, don't look at me. I can't understand how poor people think, like I've said before. And you ought'a see how rich I'll be from sweetheart deals – not to mention my huge tax breaks – once I leave office.

You're gonna be supportin' me and mine for the rest of our effing lives – and trust me, we got a MUCH bigger standard of living than you.

And to those who say I do nothin' but lie, so? It's not like the media cares enough to point 'em out. And if you're watching MY favorite NEWS Network, The Cartoon Network uh.. Fox, then you're too damned stupid to notice my lies any ole way.

In closing, let me tell you something my mama, Bitching Barb, always told us kids: “If you're gonna get screwed, you might as well close your eyes, lie back, pretend to enjoy it, and then charge 'em triple for the honor.”

Now get the F outta here so I can toke. The White House ain't the people's house anymore.. It's MINE, beatch, and I want you GONE. ::insert extra smirk here::