President Bush: "(The Devil) Saddam Made Me Do It (Iraq)" 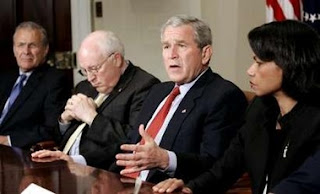 Well, we've heard every possible excuse from the president and the rest of the Bush Administration on how they could have been so terribly wrong about weapons of mass destruction (WMD) and the threat the Iraqi leaders presented to the U.S. So now, after a government audit documented 935 separate lies about Iraq - and the American economy affected by a war with Iraq - from the Bush Administration, what makes more sense than for the Bushies to turn around and blame Saddam? Well, that is, it makes about as much sense as anything else this murderous, greedy, deceitful crew does, anyway.

What marvelous timing that the FBI agent who supposedly was the one to interrogate Saddam Hussein after his capture in Iraq in December 2003 picked NOW, in light of the lie report, to disclose highlights from his seven-month-long interrogation of the Iraqi dictator, hanged just before the end of 2006.

However, for the Bushies to quickly spread the story that it was Saddam who lied and fooled them does NOT appear to be a particularly flattering spin on events. For it to matter, we would have had to BELIEVE what Saddam was saying in the first place - and we had no reason to do that, did we? After all, we expect our enemies - and America's greatest enemy of all, President George W. Bush - to lie to us. So why did the Bushies magically choose to believe the WMD/threat lies (if Saddam told them rather than the U.S.)?

Also, according to Colin Powell, and Dick Cheney, et al, they had "military intelligence" and well more than ample evidence from "trusted sources" that WMD was EVERYWHERE in Iraq and that the nation, which could barely afford to operate at all, was ready to launch suicide camel rocket SCUBA divers to blow up the West Coast (remember?).

Well, as usual with the Bushies, the truth changes faster than Bush's "reasons" for going into Iraq in the first place, and none of the stories/versions makes as much sense as that we went in there for the oil, and got a lot more (and not in a good way) than we bargained for.

Why can't the Bushies do something truly unique just ONCE? As in, tell the truth? Wait. I know why. Because to them, the truth is just something to spin into something worse. Lessons we need to keep in mind as Bush keeps ramping us forward to war with Iran.