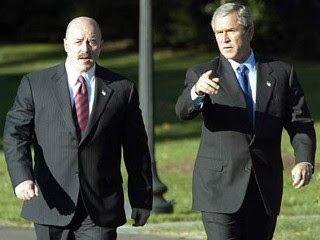 Is it true? Is the man Rudy Giuliani tried to foist off on us as Department of Homeland Security chief, a man with a most checkered past and much of it tied right to Rude Rudy, former NYPD chief Bernie Kerik, about to be indicted?

The sources say Kerik has told his close friends and members of his legal team that he expects the potential indictment to come before the statute of limitations expires on Nov. 15 on charges that could include tax evasion and bribery.

If the indictment is leveled against Kerik, it will be the latest twist in the tale that began when the child of a prostitute rose to police commissioner of New York City, achieved heroic proportions in the shadow of the collapsing World Trade Center, was gifted a diamond-encrusted chief's badge, awarded millions of dollars in stun gun stock options by business clients and given the proffer of a presidential appointment by President George Bush to head the Department of Homeland Security.

Is it just me or did some of the strangest and worst people benefit outrageously much from 9-11? Bush, included.

Maybe Pat Robertson can pray for him. God knows, I pray for Pat (to be delivered to hades where he belongs where he will fight the devil for dominance).