"Out of The Mouths of Blabbering Boobs & Bushies" 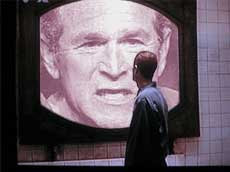 With so much bad news - from the economy to the declaration that we're having our deadliest years E-V-E-R in both Iraq and Afghanistan to a host of other awfuls, the Bushies have made a few really TELLING declarations in the past week that are worthy of note.

First, there was Bush's insistence that anything Pakistan leader Pervez Musharraf wanted to do to for his country was A-OK with Bush. But that's not quite the NEWS. Bush, when asked if it was appropriate for Musharraf to claim the presidency when he came to power through a military coupe with Musharraf heading the military at the time, Bush comes out with:

Can a leader run both the military AND be president of his country at the same time? Of course not!

Uh.... Houston to the president: YOU ostensibly run the military as commander in cheat.. uh chief WHILE you are also supposedly president.

Then there's White House spokesvermin Dana Perino, Tony Snow(job)'s even sorrier replacement who, when asked if it was appropriate for any country's leadership to choose arbitrarily to end his/her nation's democracy and civil liberties in the name of protecting its citizens from terrorism, said NO!

But all the Bushies have done, since even before Tuesday, September 11th, 2001, is spy upon us as its citizens without ANY proof any of us is jeopardizing national security, to wiretap and remove constitutionally protected liberties, all in the name of "homeland security." In fact, in the same week Perino uttered this startling declaration (and removing our liberties have NOT made us any safer, I must add), the Bushies had several new initiatives underway to snoop upon us without due cause.