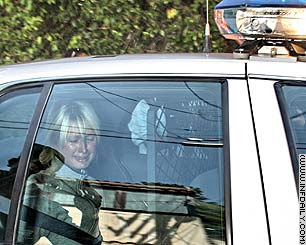 So all the real news has come to an abrupt halt because poor, poor, poor little billionairess Paris Hilton cried and screamed and pitched a tantrum because a judge sent her back to jail instead of the wildly preferential treatment she was given after just two days in lockup.
As I posted elsewhere, Paris is such a complete and utter oxygen-wasting fuckup that I can't imagine WHY President Bush hasn't appointed her to a key role, such as Paul Wolfowitz's replacement as head of the World Bank, Peter Pace's replacement as chairman of the Joint Chiefs of Staff, a newly created "Abstinence Czar" (just the kind of irony Bush loves even if he can't spell i-r-o-n-y), or as Secretary of Sleaze.
I learned this week that Paris is a committed Republican. Why does this not surprise me? Moneyed Republicans are famous for demanding tons of laws only to insist that they be held exempt from all of them because, of course, they're special.